...By Avatar Contests I mean those events with a description like:

If you don't know how to create stuff for a "living", or if you don't care for Tringo (like me) you can get money by attending those contests. There are plenty every day, therefore you can become better with more tries. If I had to guess, winning these contests is 70% planning (it helps if you have the resources to invest in a few eye-catching outfits, skins, and etcetera) and 30% luck (it helps if you have friends who vote for you, of course). It's much easier to win if you're a guy (competition - little to none) and harder if you're a girl (guess why!).

1. If you don't want to wait an hour or two for the actual voting, you don't have to.
5 - 10 minutes after the event begins (won't look suspicious): you can IM the host/hostess and ask them for the estimated wait time. Once you know what it is, you can do whatever, but do show up no later than 10 minutes before the voting. You'll have time to attract attention :-) (Actually I have a belief that showing up later gets better results - The eye gets used to old colors on the screen...eventually they recede into the background...new colors send a stronger impulse to the brain.)

2. Quality wins. People pay attention to it...especially women. Therefore buy it :) You can go as far as watching for sales on the forum I guess :p

3. Overdress; exceed their expectations...but keep within the limits of your personal, unique SL style.

4. Don't skip skin (and hair)! I bought my first second skin a couple of weeks ago and don't understand what I was thinking for the whole year that I was wearing the other really ugly one. It almost gives you definition and identity :p

5. Have your favorite dancing animation handy - the one that belongs only to you. You'll stand out.

6. I noticed that people who barely utter a word at the contest aren't likely to win. It helps if you make polite chit chat. Doing so gives you substance.

7. Say thank you when you win!

NOTE: Exceptions always happen, so please go by your own book! Just remember to have something no one else does.

A cool thing to do when you're the one who's voting (and you have to, otherwise you won't be entered into the contest!)

This is something I tried...and it just felt nice emotionally :)

Don't be quick to vote for the most striking, the most popular, the "coolest", even though you're tempted to.
Notice that bashful, SL-challenged girl in the corner...and that guy who knows he's not going to win, but he dances anyway.
Vote for them !
I did that, and afterwards IMed them, telling them I voted for them.They were touched. It also felt nice to rate their appearance, as my own way of giving them a prize :)
Posted by Nimue Galatea at 11:30 PM 1 comment: 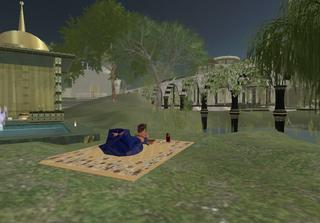 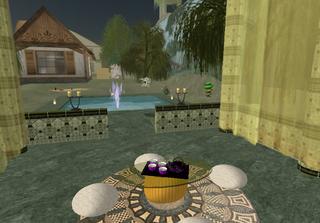 It was a modest and very small slice of land (compared to other people's builds, most of those more than 512 sq m)

Located on the tropical border of Kamba and Yora :)

Something clicked inside of me, and I just knew what I wanted to convert my land into.

...A place where the virtual dark is comforting, in the presence of flickering, soothing flames.

Posted by Nimue Galatea at 9:48 PM No comments: