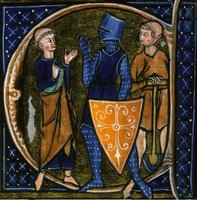 ...continued from last post...
From Wikipedia, Griefer is "the term for a player in an online computer game who deliberately sets out to discomfort other players."

Not to despair, though, because some residents have created anti-griefing tools!

Type 'griefer' into Search and NP Shield comes up (pictured)

Costing only $75L and having great features, it instantly caught my eye.

The creator, Variessa Kenzo, agreed to answer a few questions about her creation and about Second Life in general:


Nimue: What made you create this tool?

Variessa: This is my second attempt at creating a shield after an unfortunate incident at the Sandbox Island. I was on SL for less than a month and had discovered the sandboxes. I was working on a post and beam house when a griefer started pushing me and caging me. It was extremely frustrating and at the time I didn't know that sitting would have protected me. I was defenseless and angry, so I found a freebie shield and went to the weapons testing sandbox to learn about weapons. Over the next few months I perfected my shield. It was several months afterwards that someone suggested selling it.
N: What does NP stand for?

V: NP stands for nonphysical. Basically when you use the NP shield you are sitting on a prim with physics turned off. This effectively shields you from all physical attacks, making you nonphysical. The same is true any time you sit on a nonphysical prim; the NP shield just adds animations and controls to make you appear to be standing, walking, or flying. My goal was to try to make my avatar
appear as normal as possible while using the NP shield.

N: In your opinion - how does Fluffy compare to NP Shield?

V: I have not seen Fluffy before. Defensively I think the NP shield will provide more constant protection as it doesn't need to expand or activate in order to defend you so it will work on a laggy sim, but the NP shield has no offensive capability as does Fluffy. One of the great things about SL is that people have created such a diverse set of tools, so I hesitate to rate any particular device over any other.
N: Would the NP shield protect against most attacks?

V: The NP shield protects against everything I've seen except for a sim crash. The only thing that the NP shield can't stop are annoyance attacks like particle effects that surround you or prims with annoying sounds that follow you around, though in fast flight mode you can often get far enough away to make those annoying things get lost. 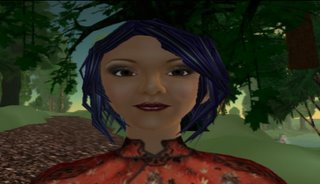 N: How did you discover SL?

V: I read about SL at boingboing.net and finally created an account when I had a little down time.
N: And finally, what is your favorite dessert?

V: This is a tough one. I would have to say peanut butter and chocolate ice cream...

...Thank you for the interview. I hope people find the NP shield useful, and feel free to let me know if there's anything you would like me to change or enhance.
---

NP Shield can be found at the TechHeaven Free Open Market

Posted by Nimue Galatea at 11:25 PM No comments: