The most fun in SL? You forgot the sandbox! 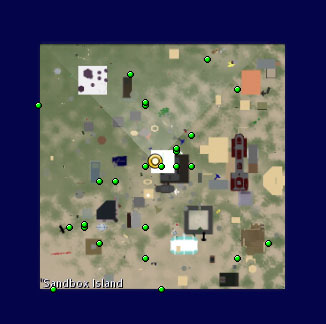 Flying around sandboxes is one of the most fun things I love to do!

Things take place here that you don't get to see in every-day-second life ;)

How often do you see a group of furries practicing their lightsaber skills, dudes flying low on giant birds, or a bumble bee playing chess with itself?

Sandboxes are the stewpots of creativity where everything begins!

They are also GREAT places to meet new people - for some reason people tend to bond quicker there.

Sandboxes seem to have a permanent stain to their name, which comes from the fact that these places attract griefers (more about them in my next post). It's best to come prepared.
I happen to have FLUFFY, which I've renamed Dot: 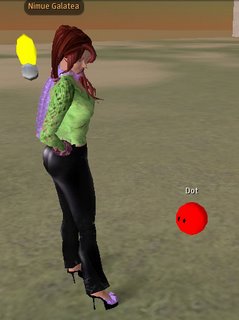 We have a very symbiotic relationship. I fulfill its enduring need to have someone to follow all the time, and it rewards me with protection and company.
I don't feel like talking to someone? Dot does it for me. He is even known to relay conversation from afar, though I've never tried it. My favorite feature is EXPAND. If I happen to need immediate shelter or a shield, Dot expands: 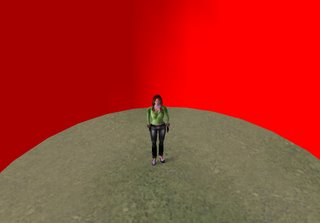 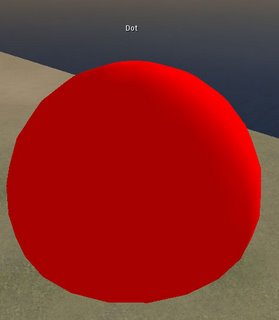 And then, on my command, shrinks back to its misleading size.
Dot doesn't look it, but he can be aggressive! If I tell him to, he will push away bothersome people that may happen to be standing next to me. I do all of this through a private channel, too.
It was sold to me on a black market for a mere ten lindens, and it came with a nice manual =) What a bargain!
(To anyone that's jealous: the original owner has vanished and the thing is copyable!! *wink*)

There is another useful griefer protection tool, but more on that in my next post.

Posted by Nimue Galatea at 1:39 PM No comments: